This is the lazy person's dump-it-all-and-forget-it kind of slow cooker rajma masala bowl. 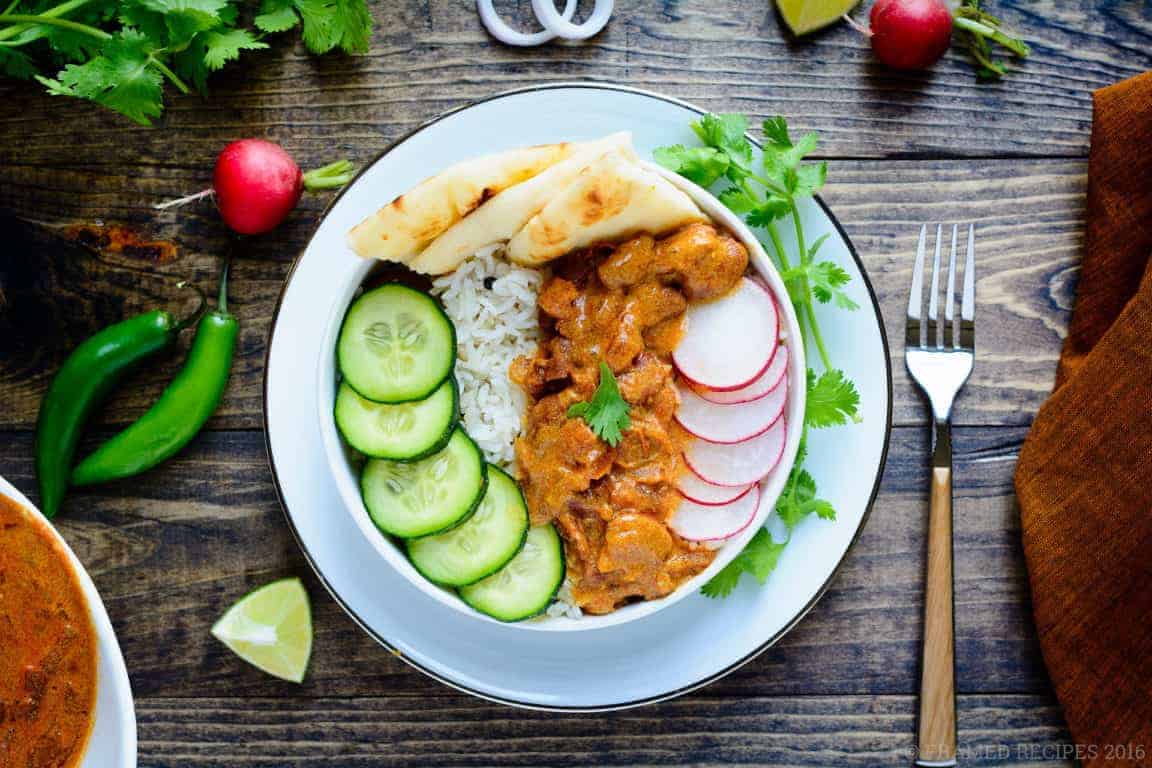 But this is the richest, most flavorsome and creamiest rajma masala (Indian style beans and rice bowl) you would have ever tasted.

Rajma Chawal - anybody who is accustomed to North Indian food will find these two words most comforting.

I was not aware of this comfort food till I moved to Bangalore. Till then, my comfort revolved around Rice, daali thoy, chawli koddel, chana ghashi and the likes. In Bangalore, our neighbors were from Andhra Pradesh (a South Indian State), but their daughter-in-law was a hard core Punjabi (North Indian). So they talked about Gongura chutney as much as daal chawal and rajma chawal. I was fascinated by rajma chawal and I started making it at home.

And yes! We loved it. There is a reason why it is the sought after comfort food 🙂

My friends here in the US introduced to me the slow cooker. Slow cooker introduced me to ways to make cooking even simpler. One of my friends even gifted me a slow cooker to get me started off. What I have is a very basic model - resembles a garden pot and has just four controls - off, low, high and keep warm. Every Black Friday, I decide, I am going to buy a fancier looking slow cooker, but every time I have refused to give in to the "demand". This simple, basic model is all I need to fulfill my slow cooking needs. Pretty happy with it.

Now, there are some misconceptions among my non-Indian friends about Indian cooking. They think we use curry powder and that Indian cuisine is tough and requires hours of slogging in the kitchen and a plethora of spices. A big NO NO to the fist misconception and yes it is a MISCONCEPTION! So far, I have not used curry powder in any of my dishes. The second one about the time taken to prepare the dishes - it is true to certain extent. But this slow cooker rajma masala (dump-it-all-in-a-slow-cooker-and-forget-about-it) will show you how to prepare Indian food easily and with simple ingredients. 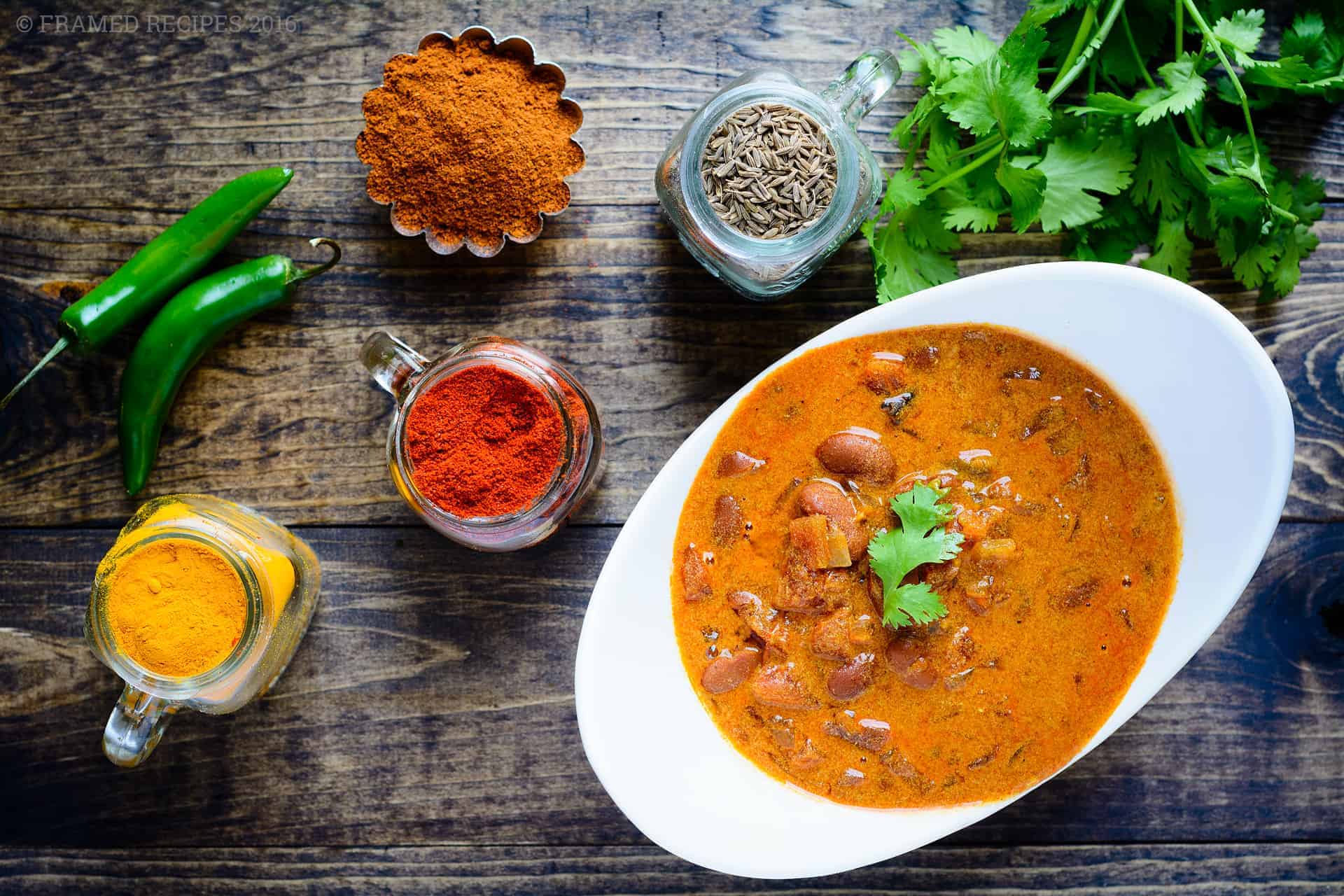 The creaminess of the rajma masala comes from the yogurt added at the end of the cooking process. Well, note that adding yogurt is purely optional. But if you are not following a vegan diet or not allergic to dairy, I highly recommend using it. The special tang from the yogurt elevates the dish to a new level. We just love it!

This has become one of my favorite recipes when I cannot for the life of me find the enthusiasm to stand in front of the stove and cook something grand. This also works when I have to spend an entire day outside and come home to a home-cooked meal. Imagine the relief of spending an entire day outside, and coming back home and your meal is waiting for you (piping hot).

The best feeling in the world!

The magic of a home cooked meal. 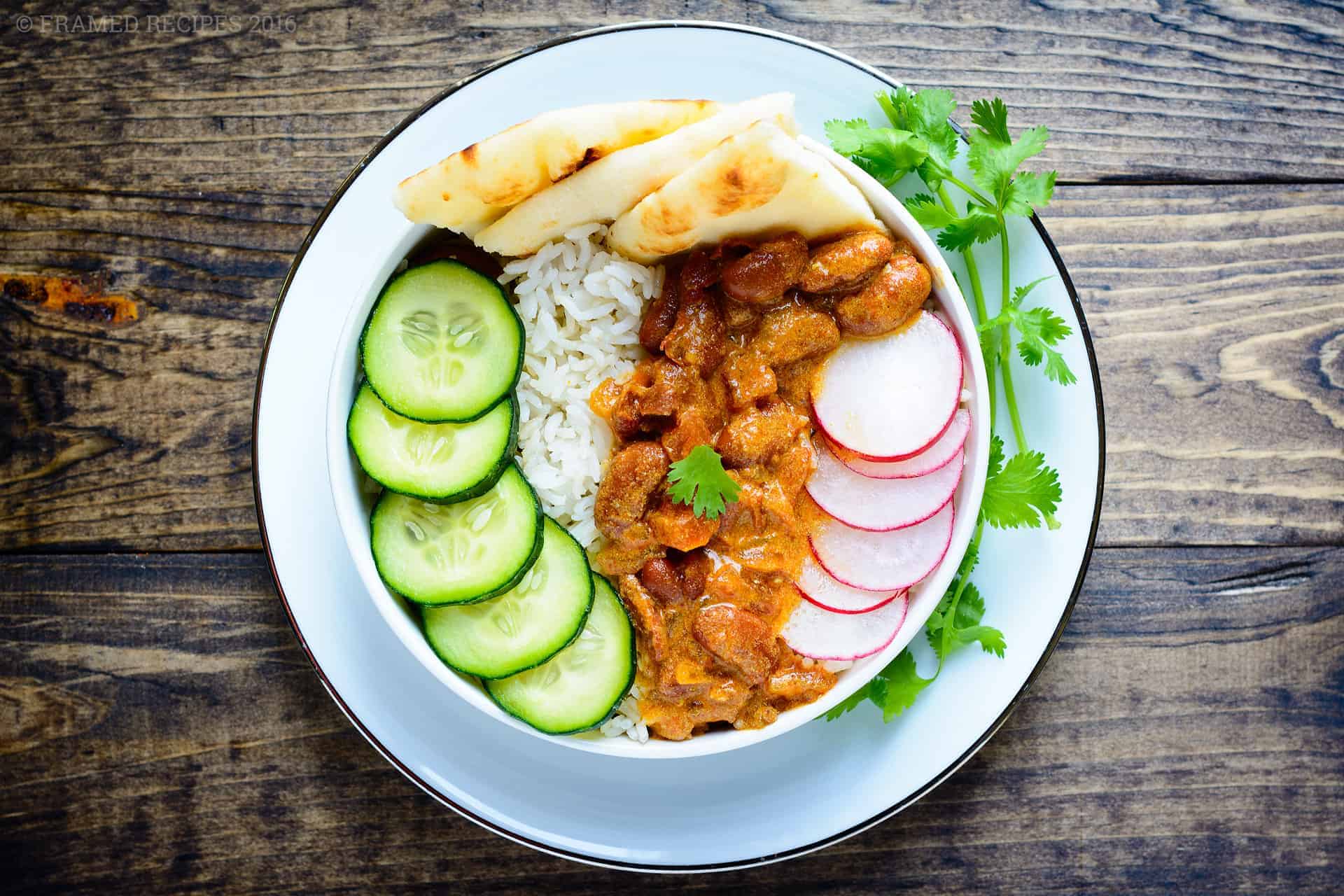 Since my plan was to adapt a recipe that I found in Anupy Singla's book, Indian Slow Cooker to a lazy person's (or for a person who has absolutely no-time-to-prep ahead) recipe, I decided to go with the canned kidney beans/rajma. But if you can, you should totally try this recipe with dried kidney beans (soaked overnight) in the recipe.

A few notes on Slow Cooker

Sonshine practices Taekwondo and while waiting there at the Taekwondo school, some of my mommy friends were talking about the slow cooker dishes. I have a friend who is reluctant to use a slow cooker and another friend who swears by it. The one who does not use slow cooker is worried about food safety while cooking the food in a slow cooker. I did my research about slow cookers and Food and Drug administration says it is safe to consume food cooked in slow cooker. (Please refer to this PDF for more information and tips from FDA).

Bowl food is gaining popularity these days, and looks like there is some good reason behind that. And yes, I have noticed it too. If I give the same quantity and same items in a plate to Sonshine, , most of it remains in the plate. But when served the same, in a bowl, everything gets eaten! The mysterious ways of the bowl. I decided to serve the rajma masala in a bowl along with rice (no time to cook? then try a store bought Indian flat bread), some naan (skip naan if following a gluten-free diet), cucumber slices and radish slices.

Take a piece of the naan , scoop some rajma masala and enjoy the flavors. For rice, Sonshine generally eats with a fork/spoon and scoops out a little rice and then some rajma masala. Alternate between rice and naan as well as some cucumber pieces and radish pieces. Typically, Indian style pickle, papad (thin fried lentil wafers) and yogurt is also served  to complete the meal.

We value feedback from readers. They make us better. Recently we got a feed back from one of our readers saying that they tried the recipe and it turned out to be a little runny. So, we tried our recipe again. It did work for us again. So here are my thoughts. I realized that the slow cooker I have is literally spewing out water. Yes, I mean literally. I think that is whey even if I use 5 cups of water in my recipe, I get the right consistency. So, to account for that, I have edited the recipe to use 3-4 cups of water (so that it would work for most of the slow cookers). But remember that each slow cooker is different and may need adjusting the quantity of water accordingly.

Now, here are a couple of things that you can do if the rajma masala turns out to be runny... 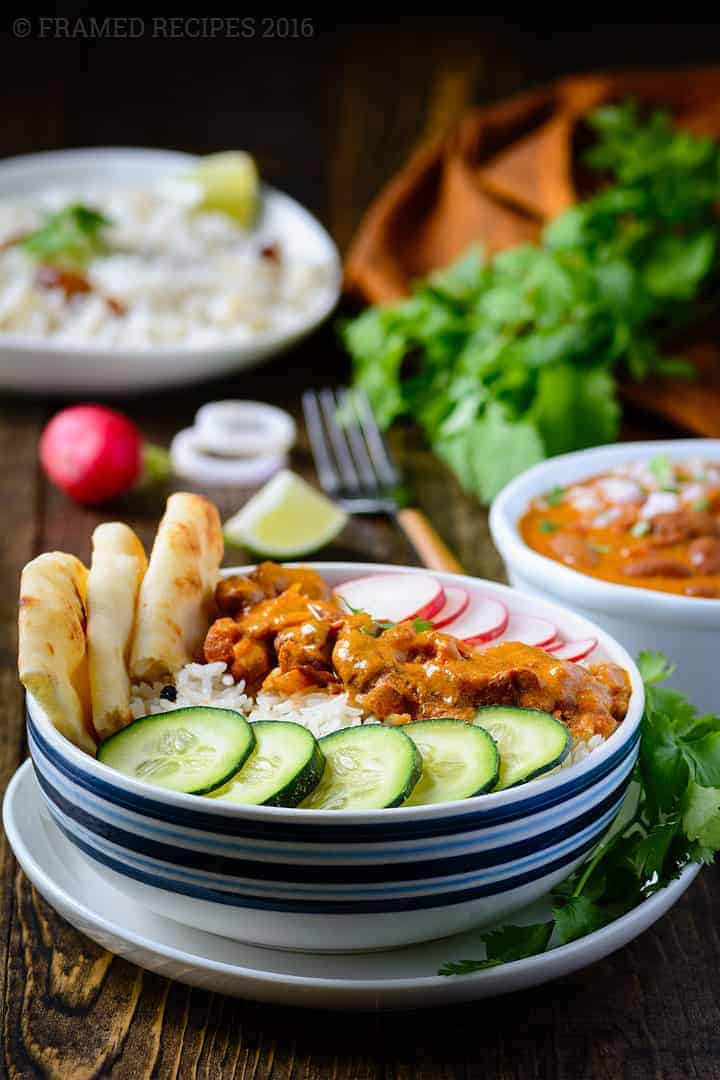 1. If using dried beans, soak the beans overnight. Cook time increases to 11 hours instead of 8 hours.
2. This recipe can be easily doubled.
3. I use a combination of Paprika (for color) and Cayenne (for heat) to get the color and heat in the dish. Instead of the combination, you can use Indian red chili powder. Adjust to taste.

We value feedback from readers. They make us better. Recently we got a feed back from one of our readers saying that they tried the recipe and it turned out to be a little runny. So, we tried our recipe again. It did work for us again. So here are my thoughts. I realized that the slow cooker I have is literally spewing out water. Yes, I mean literally. I think that is whey even if I use 5 cups of water in my recipe, I get the right consistency. So, to account for that, I have edited the recipe to use 3-4 cups of water (so that it would work for most of the slow cookers). But remember that each slow cooker is different and may need adjusting the quantity of water accordingly.

Now, here are a couple of things that you can do if the rajma masala turns out to be runny...

1. Open the lid and cook for another hour or so that the extra water evaporates.

2. Using an immersion blender, puree the rajma masala a bit. I would recommend leaving a few beans whole for texture.


Super fresh cilantro! Learn how to keep cilantro fresh with these easy steps.

What is your favorite comfort food? Let us know in the comments.

Till we meet again...